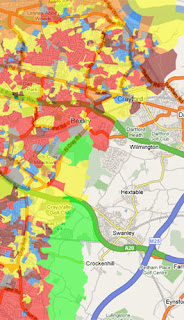 Google Map Creator is a freeware application designed to make thematic mapping using Google Maps simpler. The software is part of the GeoVUE project at CASA, sponsored by the ESRC as a node in the National Centre for e-Social Science.

Available as a free download the software enables a user to import a .shp files and export the data overlayed on Google Maps. Using Google Map Creator it is a simple three step process to go from raw data to visualization on your own webserver. Differing considerably from other similar .shp convertors, the software is available as freeware and aimed at ease of use.

In the pre-release stage a variety of thematic map for different parts of the world were produced to test the viability of the application with real data on production web servers. A complete set of help documentation is provided as well as a worked example providing a step by step guide to creating your first Google Map from .shp data.

You can download Google Map Creator and view the online documentation from here.