Google My MapsMap of the Week

Google My Maps – Map of the Week

Time was if you wanted to go on a local walk you would either pick up a leaflet at the local tourism office or unfold a map and plan your own route. The release of Google My Maps, which allows you to create your own maps, is replacing this need with user generated local walking guides. 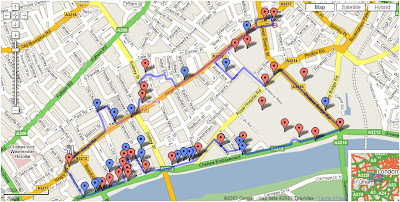 Pictured above is a walk around Chelsea, London created by Paul Thompson. The walking route takes you on a tour from Sloane Square, across to Partridges – The Queens Bakery – and round to take in a number of sites including where Charles Dickens got married in 1836.

Such routes add a new visual interface to the city and one that up until a few weeks ago would of taken either editing of XML and a Google API key or reliance on the various third party Google Mapping solutions. The ability to create and edit one’s own maps, complete with polygons, lines and embedded media should not be underestimated. Yet in today’s world of increasingly sophisticated, easy to use, and free software it is becoming commonplace to take such functionality for granted.

If you combine such features with hand held devices, such as the Nokia N95, you can automatically create such tours using the GPS features and tagging photographs to each location. See our Tutorial on GeoTagging Photographs on the N95 for more details.

Take a look at the Chelsea Walk in Google’s My Maps.

If you have created a map that you would like included in this new series of posts then let us know.