The term Mirror Worlds comes from David Gelernter’s seminal book ‘Mirror Worlds or: The Day Software puts the Universe in a Shoebox’. Essentially it is about software that mimics reality – the social, informational and visual space that is our environment.

Google Earth is an early example of a mirror world but it lacks the social space that give these representations of reality life and the all important street level, human environment. As such Twinty is worth keeping an eye on.

In their pre-release teaser the Twinty site states:

Imagine a virtual world that brings the dream of “virtual reality” back to life – a place bursting with real people and real experiences. Twinity is not an exercise in digital escapism. Instead, think of it as the virtual extension of your life. Even your avatar will look pretty familiar…

In the coming weeks a group of beta testers will begin exploring Twinity for the very first time. If you’d like to be one of them, fill out the form on the Twinty site and join the Beta. 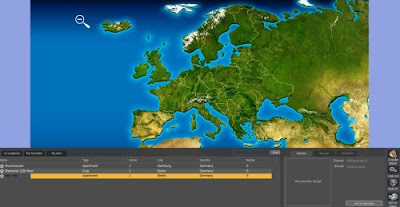 Twinty is of note on two levels:

This opens up the possibility of importing city models into the city – a recursive city or a world within a world, we will be running a feature on Twinty as soon as its released.

Metaversed got a hands on with a earlier build , see Can Twinity Foster Creativity and Economy in Virtual Cities?