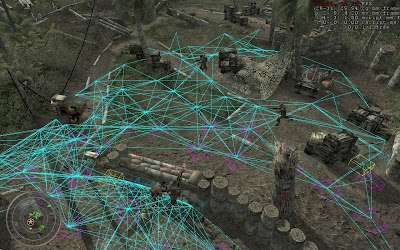 Call of Duty: World at War is a first-person video game developed by Treyarch and published by Activision for Microsoft Windows, Nintendo DS, PlayStation 2, PlayStation 3, Wii, and Xbox 360. While using war based games for geographic, urban or architectural visualization can be controversial the principle is the same – you strip out the game and use the engine to allow real-time walkthroughs and the game assets to populate scenes with pedestrians, traffic etc.

Nixon has uploaded a useful tutorial to Vimeo that details how to create a house using the modding software that ships with Call of Duty, World at War and run it in-game:

Call of duty Mod tools Tutorial. from nixon on Vimeo.

For more info on the mod tools see the Treyarch wiki page, the AI navigation page is of particular note for those interested in agent based modelling in game engines.