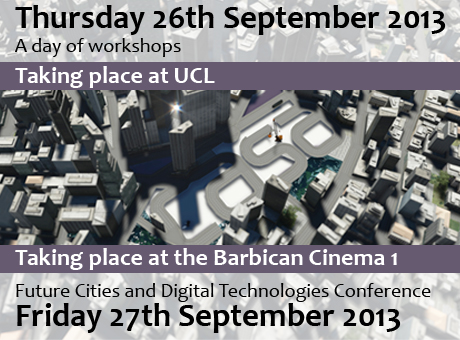 Held at the 300 seater Barbican Cinema One in London, the conference will deal with new ways of visualising cities in 3D using virtual realities, it will show how we are building an internet of things around which the city is being reinvented and it will explore how the prosperity of cities relates to their scale and size. A particular feature of the day will be a focus on new ways of exploring movement patterns in cities using data sets from smart cards, from open data sources and from new methods for crowdsourcing not only data but ideas for future cities.Registration is now open for this free one day event:
http://casaconference2013.eventbrite.co.uk/

The Future Cities and Digital Technologies Conference is preceded by a day of free workshops at UCL.  Further details are available at: