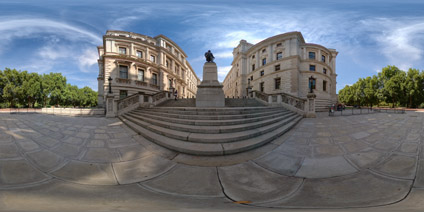 The panorama above centers on the statue of Robert Clive located off Whitehall, London, next to the Cabinet War Rooms. Robert Clive is controversially known for laying the foundations of the British empire in India, where he got the name “conqueror of India”. As a employee of the East India Company, Clive arrived in India in 1743 and secured British rule by defeating the then French occupiers.