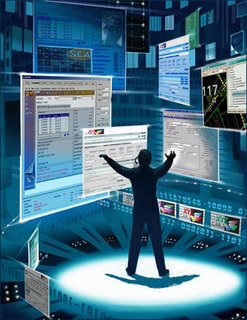 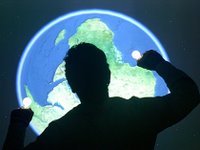 Picked up via the ever impressive Oogle Earth Blog is the news that Atlas Gloves was Dan Phiffer and Mushon Zer-Aviv part of the ITP – NYU’s Interactive Telecommunication Program. have developed a pair of ‘Atlas Gloves’. The gloves are a DIY physical interface for controlling 3D mapping applications like Google Earth. The user interface is based around a pair of illuminating gloves that can be used to track intuitive hand gestures like grabbing, pulling, reaching and rotating. The Atlas Glove website has a video of the interface in action as well as details on how to build you own from a pair of ping pong balls, led lights and a webcam.

We are on the case and people are being dispatched to locate ping pong balls as we type. If we get it up and running we will put up a post as well as contacting the team to see if we can help out in any way with other applications such as ArcExplorer (?)….

****
As an update we have our ping pong balls (thanks Joel), super glue and a couple of cheap led torches. If we dont glue our fingers together we should be running a test this afternoon and updates will follow on our progress. (2nd August 2006).