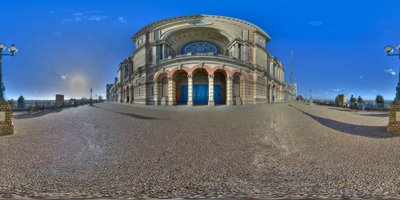 First opened as “The People’s Palace” in 1873, Alexandra Palace provided the Victorians with a great environment and recreation centre. Just sixteen days after it’s opening, the Palace, which had already attracted over 120,000 visitors, was destroyed by a fire in the dome.

On 1st May 1875, less than 2 years after the destruction of the original building, a new Palace opened. Covering 7 acres, it was centred on the Great Hall, home to the mighty Willis Organ which was driven by two steam engines and vast bellows.

After certain financial difficulties, an Act of Parliament in 1900 created the Alexandra Palace and Park Trust. The Act required the Trustees to maintain the Palace and Park and make them “available for the free use and recreation of the public forever”.

In 1935, the BBC leased the eastern part of the building from which the first public television transmissions were made in 1936. Alexandra Palace was the main transmitting centre for the BBC until 1956, when it was used exclusively for news broadcasts.

You can view the panorama in QuickTime VR (4.1Mb).