While working on the second stage of the Importing SketchUp/3D Max into Oblivion tutorial we got thinking about our panoramic spheres in 3D space.

Too date we have used the spheres to produce a sample high definition concept movie featuring 360 x 180 degree views of The Chapel of Peter and St Paul by Wren, Southwark Cathedral, The Painted Hall by Wren and St Giles in the Field, London.

Taking the concept further we have developed the Google Earth Panorama Viewer which takes images from Flickr or your hard drive and using a reversed face sphere allows you to ‘Step Inside’ buildings and scenes in Google Earth. The movie below highlights the idea and you can follow our tutorial to find out how to create your own:

The same concept can be developed within the Oblivion Engine – again this is sample work while finding files to try out for the forthcoming second part of the tutorial. The movie below illustrates a panoramic ‘Step Inside’ sphere of the South Pacific Railroad in Oblivion: 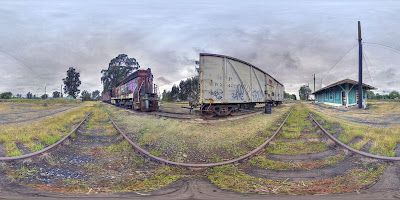 You can view the High Dynamic Range panorama (3.62Mb) in Quicktime Virtual Reality.