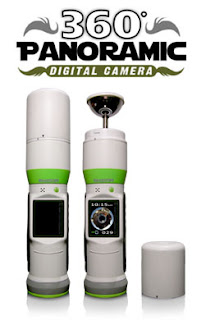 The ability to add a ‘one shot’ panoramic lens to a digital camera has been around for a while and although the combination works it is unwieldy to carry around. Bubblescope have taken the ‘One Shot’ lens method and built a camera around it – resulting in world’s first standalone, single-shot panoramic digital camera for capturing experiences as 360º x 104º. Using BubbleScope® 1.0 software on a PC and Mac the resulting images can be converted to QTVR movies.

Bubblescope does seem to be to the simple solution for one click panoramas. The resolution maybe low(ish) and the rig doesn’t compete with traditional giga pixel panoramas made with multiple images but for being out and about it captures the world in 360 degrees.

To be honest we want one!

Take a look at the BubbleScope website for more info, the camera will be available to order shortly..