Constructing 3D models of buildings is all about extracting the geometry from images using photogrammetric techniques. As such, although it goes against basic geometric principles it also lends itself to historic reconstruction via referenced hand drawn images.

Over eight years ago we used the now sadly demised software CANOMA to create a view of London in 1616 – as the YouTube movie below illustrates:


CANOMA excelled at such scenes as it required only a single image to define the 3D space compared with many photogrammetric packages which require matching views and overlapping construction points.

Using a previous version of SketchUp – without the PhotoMatch feature – we rediscovered modelling from paper with our take on the Bank of Hong Kong in Google Earth modelled using Skyscrapermodels.us by John Townsend as a resource. The site provides full plans of a number of notable skyscrapers which are designed to be printed out onto card or paper and folded to construct the geometry. 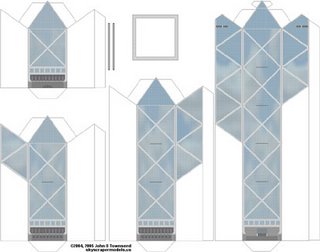 Taking this further Google SketchUp now has the ability to ‘PhotoMatch‘ allowing one to carry out a similar technique to the one used in CANOMA. An example of which can be seen in the model of St Martin’s in the Field Church, London, by barnabu:

The model is still to be scaled but you can download the model to date directly into Google SketchUp from barnabu’s site.

A future project is to reconstruct the Old St Paul’s in London – but as SketchUp is free and easy to use then if you get there first let us know – the reference image can be found here.