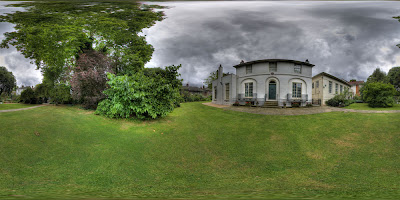 The panorama above centers on the house where John Keats lived from 1818 to 1820. It is here that Keats wrote ‘ Ode to a Nightingale‘, and fell in love with Fanny Brawne, the girl next door.

Known as ‘Keats House’ and located in the leafy borough of Hampstead North London the City of London website notes that:

‘The house was originally built as a pair of semi-detached houses known as Wentworth Place. The two houses shared a garden, which retains much of the same layout as it did originally. Keats lodged in one house with his friend, Charles Armitage Brown.

The two years Keats spent at the house were arguably his most productive as a poet, and perhaps this reflects the fact that while here, he met and fell in love with Fanny Brawne, the daughter of the family in the second house. They became engaged to marry, but the romance was cut tragically short. Keats, seriously weakened by tuberculosis, was advised to seek warmer climes, and left England for Italy in 1820. He was never to return, and died in Rome in 1821at the age of just 25.

The two houses were converted into one in 1838-9 by the new owner Eliza Chester. The exterior remains very much as it was in Keats’ time, except for an added drawing room. The house remained as a private dwelling until, threatened with demolition to make way for a new development, it was saved by public subscription from Europe and America.

In 1925 it opened for the first time as a museum, and since then it has remained open to the public apart from a brief spell during the war and several repair programmes.

The panorama was taken on the same day as our St John’s Church Downshire Hill view and of note is the stormy sky in the HDR image.

You can view a high resolution version of the image via our Flickr page or take a look around in 360×180 degrees in Quick Time Virtual Reality (4.3Mb).