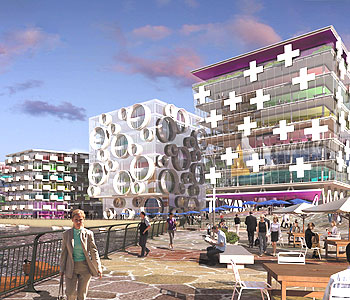 Planning consent has been granted for the first two, nine-storey “sugar cube” buildings in the Middlehaven regeneration area. The 80-acre site is a former docks, adjacent to Middlesbrough town centre in the United Kingdom.

Part of a £200 million regeneration project the aim is to create a riverside community with 750 new homes and 1000 new jobs.

Central to the project is Will Alsop who was recently described by ArBITAT as the ‘UK’s architectural bad boy’ with The Guardian quoting that Alsop ‘detests planners’.

To be honest to get things done in the UK you do need a lot of vision and determination to get passed the narrow mind attitude of some in the public sector and as such it is refreshing to see the designs passing planning permission.

Squint/Opera were commissioned by Quintain to create an insight into the winning competition entry for a new town in Middlesborough (interestingly the movie does not include the term ‘planners’ in the introduction):

What would be great is to see such visualisations and designs moving into worlds such as Second Life, suggesting such issues to regeneration teams and local planners is however notoriously difficult….