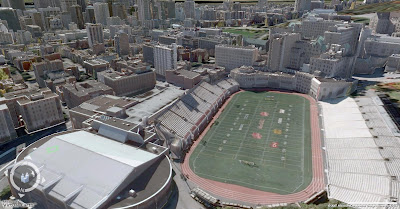 Microsoft’s Virtual Earth it could be argued is reaching a tipping point whereby it becomes for the browser of choice for 3D city models.

Yesterday we looked at Toulouse in France, part of the recent layer update released this week. Today we look at Montreal in Canada – another city of their planned 500 over the next 12 months to get the Microsoft Photogrammetric treatment.

The movie below provides a flavour of the model:


Music by The Tartan Rascals

With Microsoft releasing such detailed and large scale models it’ll be interesting to see Google’s responce. We are assuming it’ll be along the lines of new tools for the community to build the city from the bottom up..

ESRI and Microsoft Team up for ArcGIS 9.3.1