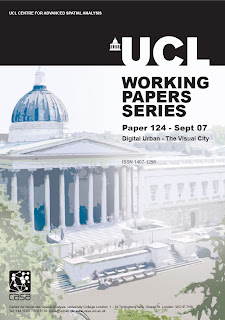 We have a new working paper out entitled ‘Digital Urban – The Visual City’, hopefully worth a read…

Nothing in the city is experienced by itself for a city’s perspicacity is the sum of its surroundings. To paraphrase Lynch (1960), at every instant, there is more than we can see and hear. This is the reality of the physical city, and thus in order to replicate the visual experience of the city within digital space, the space itself must convey to the user a sense of place.

This is what we term the “Visual City”, a visually recognisable city built out of the digital equivalent of bricks and mortar, polygons, textures, and most importantly data.

Recently there has been a revolution in the production and distribution of digital artefacts which represent the visual city. Digital city software that was once in the domain of high powered personal computers, research labs and professional software are now in the domain of the public-at-large through both the web and low-end home computing.

These developments have gone hand in hand with the re-emergence of geography and geographic location as a way of tagging information to non-proprietary web-based software such as Google Maps, Google Earth, Microsoft’s Virtual Earth, ESRI’s ArcExplorer, and NASA’s World Wind, amongst others.

The move towards ‘digital earths’ for the distribution of geographic information has, without doubt, opened up a widespread demand for the visualization of our environment where the emphasis is now on the third dimension.

While the third dimension is central to the development of the digital or visual city, this is not the only way the city can be visualized for a number of emerging tools and ‘mashups’ are enabling visual data to be tagged geographically using a cornucopia of multimedia systems.

We explore these social, textual, geographical, and visual technologies throughout this latest working paper.