E-Research is an emerging indoctrination with new intellectual fields and techniques of research opening up across the disciplines.

Craig Stewart of the University of Indiana defines Cyberinfrastructure as:

Known in the UK as E-Social Science, Cyberinfrastructure we would argue is moving away from high performance network services such as GRID Computing and towards web based services which in turn could be seen as Web 2.0.

Tim O’Reilly’s compact definition of Web 2.0 is as follows:

Web 2.0 is the business revolution in the computer industry caused by the move to the internet as platform, and an attempt to understand the rules for success on that new platform. Chief among those rules is this: Build applications that harness network effects to get better the more people use them. (This is what I’ve elsewhere called “harnessing collective intelligence.”) 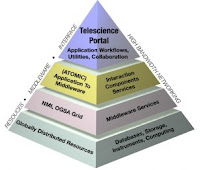 -Social Science is perhaps a change in style of research, it embraces concepts of data sharing and breaking down silos which cause many social scientists difficulty – we have been to many conferences and presented work on Second Life, Google Maps and Google Earth to much criticism among the more traditional academics.

Indeed we would argue that the relationship between E-Social Science and the traditional social scientist is an uneasy one.

E-Research is tied to data as Ralph Schroeder of the Oxford Internet Institute is currently noting in his presentation at the Third International Conference on e-Social Science from which we are writing.

Social Shaping is key to this concept allowing the community at large to contribute too and produce data for interdisciplinary scientific analysis -this is where it ties back to Web 2.0, our own work on this blog on is firmly routed in Web 2.0, or is it Cyberinfrastructure?