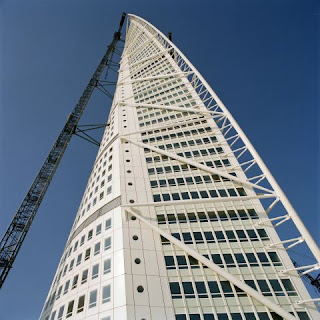 Wikikpedia states that the HSB Turning Torso, a skyscraper in Malmö, Sweden is located on the Swedish side of the Öresund strait.

It was designed by the Spanish architect Santiago Calatrava and officially opened on 27 August2005. The tower reaches a height of 190 metresfeet) with 54 stories. Upon completion, it was the tallest building in Scandinavia, and Europe’s second highest apartment building, after the 264-metre-high Triumph-Palace in Moscow.

The design is based on a sculpture by Santiago Calatrava called Twisting Torso. It uses nine five-story cubes that twist as it rises; the top-most segment is twisted ninety degrees clockwise with respect to the ground floor.

Each floor basically consists of a rectangular section surrounding the central core, along with a triangular section, which is partially supported by an exterior steel scaffold. The two bottom cubes are intended as office space. Cubes three to nine house 149 luxury apartments.

It is the sort of building that is ripe for the Google SketchUp treatment and indeed Tim Danaher of the VizArch Blog has done exactly that, complete with a movie shared via YouTube and embedded below:

Tim has written a tutorial on how to make the model, the tutorial is published in the forthcoming issue of 3D World Magazine, issue 99, we look forward to it.

While sketchup is criticised from some areas of the industry the model undoubtedly shows how it is possible to rapidly model intricate architecture. Final rendering can be significantly improved with HDR lighting, take a look at VizArch for some examples.