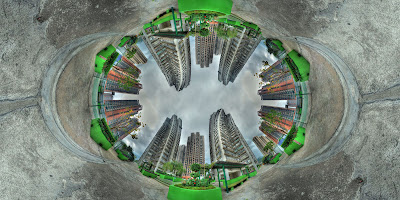 The image above is a 360 x 180 view of the apartments located on the roof of the New Town Plaza in Hong Kong. Captured in high dynamic range (tutorial coming soon) the image is uniquely deceptive in its portrayal of the urban environment.

The original image is a simple panorama taken in the middle of the apartment complex, captured on a day with extremely overcast conditions it creates a slightly uninspiring panorama – although still of interest for those looking at urban density or structure. Using the Flexify plugin from Flaming Pear it is possible to quickly and easily warp and clone the viewpoint to create new takes on the urban scene.

The image at the top of the post is ‘hyper-double’ whereby the original panoramas is cloned, warped and merged in one simple operation. There are any number of options – such as the triple cloned ‘fractal’ representation below:

You can view larger versions of the images along with numerous other examples (taken on sunnier days…) in our flickr group.

We will be including a full tutorial on Flexify shortly…