Visualisation is key to our understanding of spatial data, a fact that large companies and organisations realise which is why perhaps the Post Office haven’t released a map of the recent round of post office closures.

They have however published a document entitled ‘Network Change Programme Area Plan Decision Booklet, London’. CASA, home of digital urban, has gone through the document and geo-coded each closure location allowing it to be visualised: 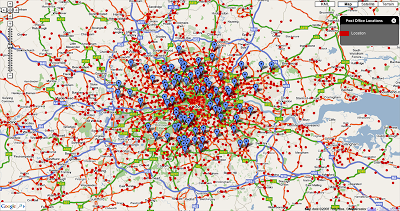 In May 2007, following a national public consultation, the Government announced a range of
proposed measures to modernise and reshape the network of Post Office® branches. Local public consultation was carried out on the proposed closures with approximately 27,600 pieces of correspondence received and 79 meetings held with customers and their representatives. This resulted in the saving of only 7 post offices with 155 in the London area now earmarked for closure.

At CASA we have mapped them and uploaded them to our new MapTube service to view. The results are interesting, its all well and good reading a slightly hidden document on the post office website but when you go through all the closures, geo-code them and plot them on a map the impact is clear: 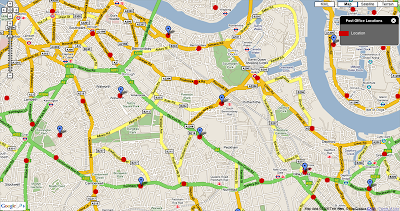 The red dots indicate current post office locations with the blue markers confirmed closures. You can type in your postcode using the Google Search at the bottom left of the map to see if your local branch is closing.

Click to View the Postcode Closure Map for London via MapTube

Current public documents from the Post Office can be found here.