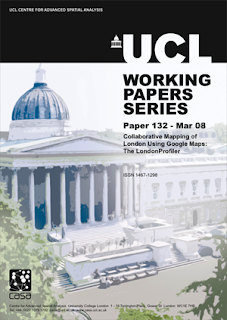 Entitled Collaborative Mapping of London Using Google Maps: The LondonProfiler, it is a must read for anyone interested in the labs Google Map Creator software and the way it can be used to display information.

The papers abstract is as follows:

This paper begins by reviewing the ways in which the innovation of Google Maps has transformed our ability to reference and view geographically referenced data. We describe the ways in which the GMap Creator tool developed under the ESRC National Centre for E Social Science programme enables users to ‘mashup’ thematic choropleth maps using the Google API.

We illustrate the application of GMap Creator using the example of www.londonprofiler.org, which makes it possible to view a range of health, education and other socioeconomic datasets against a backcloth of Google Maps data.

The paper is available as a PDF (732Kb)Download.

To see the work in action, take a look at the London Profiler site.

At the moment we are working on a new working paper on Neogeography, it should be online later this week as a download….