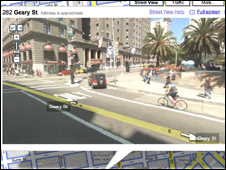 The BBC have a good article online looking at opposition to introducing Street View to Google Maps in the UK. Apparently Google started capturing London this week.

The main issue is with the UK’s privacy laws where people cannot be photographed without consent if the output is to be used for commercial gain – as is the case with Google Maps. There is also the issue of privacy in terms of houses appearing on the Internet – we did some work for Camden Council a while back and that was removed from the web due to issues with houses being identified in 360 x180 degree photographs.

The BBC article is well worth a read, especially for the quotes from the Privacy International Group.

We know Google have done a lot of good for mapping etc and we at digital urban are one of their strongest supporters but recently with their launch of MapMaker some criticism is emerging – see Google Wants to be TeleAtlas at the OpenGeoData Blog.

Web 2.0 is all well and good but companies are starting to use Neogeographers and Crowd Sourcing for their own commercial gain. Although of note is the word ‘free’ and the availability of free data, regardless of source, has changed the world of geographical information behind recognition over the last couple of years.

Its a controversial subject, as our in-box is testament to resulting in this being a revised version of the original post, we will have more thoughts on this in future posts…