The rise in knife attacks and the number of teenagers murdered has been sadly dominating the news for a while now in the UK. Data on such incidents is hard to come by as the police do not provide open access to incident locations, despite it perhaps being in the public interest.

As such it is left to the public at large to fill in the gaps – in the case of teen killings, MapMan has created a map of teenagers murdered in London since 2007. Created using Google MyMaps the list has been compiled via various websites (such as http://www.capitalradio.co.uk/article.asp?id=532062) with street names identified in related press articles and plotted on the map. Actual position within the street will not be accurate, but the street names themselves should be. Note the map relates to all murders, not just knife related incidents. 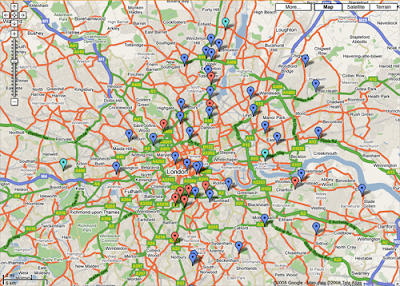 Using MapTube the map can be overlaid with other data sets, such as a map uploaded detailing assault using a knife or sharp objects extracted from all hospital admissions (2007). The map is based on data with a cause code of ICD-10 X99 (assault by sharp object) and excludes all codes that may indicate accidental injury (ICD10 – W25, W26), self inflicted (ICD10 – X78) and undetermined intent (ICD10 Y28). Figures are directly age standardised per 100,000 population with CI’s – Actual counts were excluded in the map due to disclosure surrounding low numbers. By overlaying the two maps you begin to get a picture of the extent of knife crime and the number of murders in London. 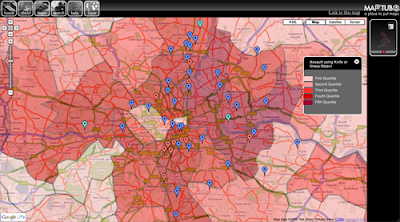 Each link is clickable for more information. Such data should really be available via either the http://www.london.gov.uk/ or http://www.met.police.uk/ along with other locations of crime in the city. It may be alarming to see such incidents mapped but this is the city we live in and the public should have a right to view exact locations of crime in their neighbourhoods.

If you then use MapTube to add in Regeneration Areas within London a clear pattern between teenage murders and deprivation emerges: 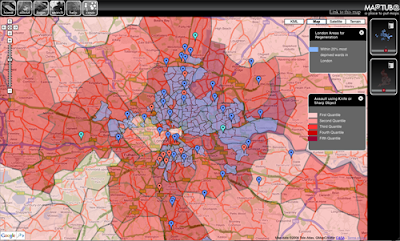 You can view the map direct via MapTube. The map can also be viewed against other indicators such as ethnic population, barriers to housing or any of the other 47 maps relating to London. KML maps will be fully integrated into the site over the next few weeks.

The work also ties in with our near real-time geographic survey in association with BBC Look East on Anti Social Behavior (using the same system as our BBC Radio 4 Credit Crunch Map) we will have more on that in future posts.