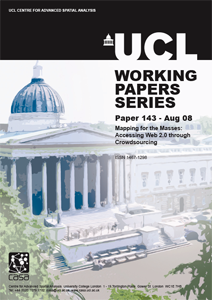 Our latest working paper is now available for download – entitled Mapping for the Masses: Accessing Web 2.0 through Crowdsourcing.

The paper first develops the network paradigm that is currently dominating the way we think about the internet and introduce varieties of social networking that are being fashioned in interactive web environments. This serves to ground our arguments about Web 2.0 technologies. These constitute ways in which users of web-based services can take on the role of producers as well as consumers of information that derive from such services with sharing becoming a dominant mode of adding value to such data.

These developments are growing Web 2.0 from the ground up, enabling users to derive hitherto unknown, hidden and even new patterns and correlations in data that imply various kinds of social networking.

We define crowdsourcing and crowdcasting as essential ways in which large groups of users come together to create data and to add value by sharing. This is highly applicable to new forms of mapping. We begin by noting that maps have become important services on the internet with nonproprietary services such as Google Maps being ways in which users can fashion their own functionality. We review various top-down and bottom-up strategies and then present our own contributions in the form of GMapCreator that lets users fashion new maps using Google Maps as a base.

We have extended this into an archive of pointers to maps created by this software, which is called MapTube, and we demonstrate how it can be used in a variety of contexts to share map information, to put existing maps into a form that can be shared, and to create new maps from the bottom up using a combination of crowdcasting, crowdsourcing and traditional broadcasting.

The paper concludes by arguing that these developments define a neogeography which is essentially ‘mapping for the masses’.

Those interested may also like to check out our full working paper series, including the recent The Renaissance of Geographic Information: Neogeography, Gaming and Second Life.