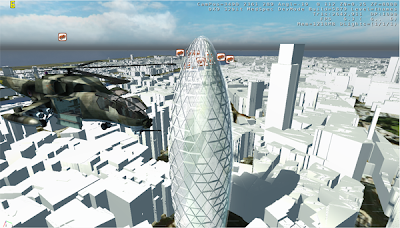 Victor Keegan, writing in The Guardian, takes a look at the number of companies working on building London as a 3D model. From high end architectual represenations to Second Life the article takes a look at the history and the gold rush to build a three-dimensional replica of London, complete with streets, shops, parks, even the underground system.

Our work is covered, although its almost six years of work we would like to forget, being ahead of the field, new planning laws about to go through and a real chance of changing how Londoners view and have a say about their city – still c est la vie, as Victor states:

The biggest – covering not just central London but an area stretching out to the M25 – is also the most bizarre: a publicly funded project that the public can’t see. Built by University College in association with Connect London, it boasts 3.2m building blocks and could have gone live two years ago, well ahead of the competition, as part of Google Earth, but for our friends at Ordnance Survey, which controls the vital database refused permission. Cue the Free Our Data campaign.

Take a look at the full article via The Guardian Online.

The Guardian – Virtual London and the Ordnance Survey

The Full Statements from Ordnance Survey and Google