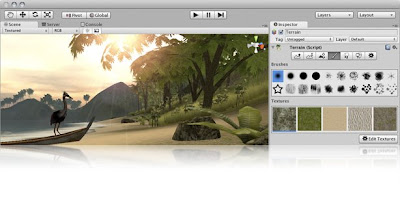 Wikipedia describes Unity as an integrated authoring tool for creating 3D video games or other interactive content such as architectural visualizations or real-time 3D animations. Unity is similar to Director, Blender game engine, Virtools or Torque Game Builder in the sense that an integrated graphical environment is the primary way of authoring the game.

The editor runs on Windows and Mac OS X and can produce games for Windows, Mac, Wii, or iPhone platforms. It can also produce browser games that use the Unity web player plugin, supported on Mac and Windows.

The movie below by 3dnemo provides an insight into the possibilities:

Version 2.5 now supports the ability to drag and drop .max files right into the Editor, including support for all skeletal based animation, multiple UVs, and vertex colors. This builds on the existing support for Maya, Blender, and all other 3D applications that integrate with the latest FBX plugin on the Windows platform.

There are two main licenses: Unity Indie ($199), and Unity Pro ($1499). The Pro version has additional features like render-to-texture, postprocessing effects, and the ability to build standalone Windows games. Unity Pro is also required for businesses with over $100,000 turnover/year.

The second movie, again by 3dnemo , illustrates a cityscape running within Unity:

We will be taking a closer look at Unity over the coming weeks, for now see http://unity3d.com/unity/ for more information.

Thanks go to an anonymous commenter in our post on hyperShot: Near Realtime Rendering System for Windows and Mac for mentioning Unity…

Update – See our Sample City Exhibition Space in Unity for Windows and Mac.