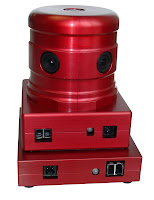 LadyBug is a six camera lens system capturing a 360-degree view – similar technology is used for Google Street View. With the addition of Apple’s Shake the linear output was converted into a ‘planet’ view allowing for the effect in the video below:

The panoramic video was shot by Digital Immersion a French company specialised in immersive media – see www.digitalimmersion.fr for more examples.

Thanks go to Andy Hoskins for emailing this in.

Adverts in Street View – Could be Video?

Immersive/Panoramic Video: Are we Missing Something?