The Tweet-o-Meter developed here at CASA is now live for the Cup Final Weekend, making it, in the words of Carling, the First Digital Cup final.

The Tweet-O-Meter measures the volume of tweets about the Carling Cup Final and shows who’s tweeting hardest; fans in Birmingham, Manchester or London! As Carling states – it’s a great way to see where the buzz is in the build-up to, and during, the final.

For your tweets to be measured use #CCF10 and if you’re following a particular team add #villa or #manutd. Also, you’ll need to geolocation turned on in Twitter to do this…

To enable us to locate your Tweets, login to your Twitter account at www.twitter.com and select “Settings” at the top of the page. In the location setting, check the box next to “Enable geotagging”. That’s it! Any message from now on sent via Twitter with the “#ccf10” tag will be caught by our Tweet Meters. 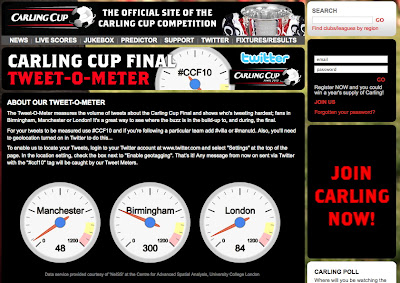 The Tweet-o-Meter system was developed here at CASA, University College London and measures the amount of tweets (measured in Tweets per Minute or TPM) received from various locations around the world. The gauges are updated every second giving you a live view of the TPM’s in each location.

There is some serious science behind the Tweet-o-Meter, it is designed to mine data for later analysis relating to furthering our understanding of social and temporal dynamics for e-Social Science within the Twitter demographic. The system is as part of a wider survey tool as part of the NeISS project in association with us here at Digital Urban, with research by Urban Tick and coded by Steven Gray.