SketchUp 7.1 for Architectural Visualization – Three Copies to Give Away!

By Andy 8 July 2010 No Comments
Google SketchUp is one of our favorite packages for its shear innovation and ease of use, it arguably brought 3D modelling to the masses. As such tutorial style books are a great way to learn the intiqquses, tips and technnigquws to improve your workflow and get the best out of the software. SkeetchUp 7.1 for Architectural Visualisation by Robin de Jongh is published by PACKT Publishing and is a must buy for anyone
With this book in hand and patented technology such as the PhotoMatch, Push-Pull, and Face-me components you can produce commercial quality photo-realistic or artistic output of your designs.

This book shows you how to master SketchUp’s unique tools to create architectural visuals using professional rendering and image editing techniques in a clear and friendly way. You’ll be able to get started immediately using these SketchUp tools and open-source rendering software. The book shows you how to create architectural visuals from your SketchUp models. In no time you’ll be creating photo-realistic renders, animated fly-overs, and walkthroughs. You will also create composites of real and rendered images, creating digital and paper presentations to wow clients. For the impatient, a “Quickstart” tutorial is provided in the first chapter to get you rendering a photo-realistic scene immediately. The rest of the book builds on this knowledge by introducing in-depth concepts, tricks, and methods in an easy-to-follow format through quick tutorials.

Using easy step-by-step explanations, this book opens the door to the world of architectural visualization. With no prior visualization experience you will quickly get to grips with materials, texturing, composition, photo-compositing, lighting setup, rendering, and post-processing. You’ll also be able to take SketchUp’s unique sketchy output and add the artistic touch to create pencil and watercolor scenes. With this book you’ll be able to get started immediately using the free SketchUp download and open-source rendering software.

Robin de Jongh has worked as a computer-aided design professional on large and tiny construction projects for many years. He occasionally works as a freelance consulting engineer and has previously run a CAD and visualization company using SketchUp as the main design tool. Robin recently set up a SketchUp training firm through which he promotes SketchUp as the future of CAD in the Architecture, Engineering, and Construction (AEC) sector by providing training seminars and e-learning products.

Do you want to know what peoples views are on the issue of the day, do you want to ask peoples views on a new product without restrictions on the number of responces, perhaps you are carrying out a straw poll or do you want to collect data to input into a scientific model? If the questions can be asked or surveyed, all you need is SurveyMapper. 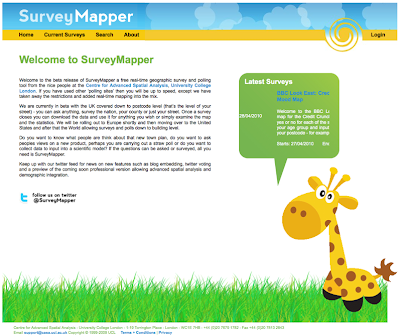 The beta release of SurveyMapper, a free real-time geographic survey and polling tool from the nice people at the Centre for Advanced Spatial Analysis, University College London, is now live!

If you have used other ‘polling sites’ then you will be up to speed, except we have taken away the restrictions and added real-time mapping into the mix. Simply sign up (its free) and then your be able to create your own survey. Currently we have three levels of survey available – Worldwide, based on countries, European Countries and UK Postcode.

You can ask anything, survey the nation, the world or just your street. Once a survey closes you can download the data and use it for anything you wish or simply examine the map and the statistics. We will be rolling out to the United States shortly and after that the world allowing surveys and polls down to building level. 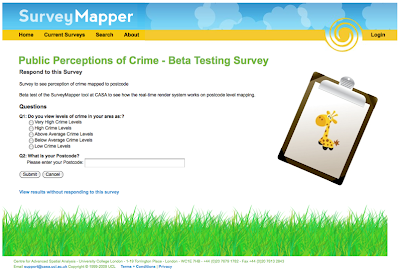 To take part head over to SurveyMapper.com