By Andy March 3, 2011 One Comment
Here at University College London, the Grant Museum of Zoology, which contains some of the rarest extinct animal specimens in the world, is to re-open on 15 March, 2011 after an eight-month renovation and moving period. Over the past few months we have been working here in CASA with the nice people over at the Centre for Digital Humanities and UCL Museums to build interactive signage for the exhibits.
Based around the ‘Tales of Things‘ technology, each artefact has a QRCode and Twitter Hash Tag allowing digital conversations to be carried out both inside and outside of the museum space. In typical ‘sneak peak’ photo mode, below is a look at one of the iPad mounts:

We are not sure why all first look photos are blurred, but such is the case. The project, known as ‘QRator’ is placing 10 iPads around the museum to explore new models for public engagement and informal learning in museums using handheld mobile devices and new interactive digital labels. The aim is to enable the public to collaborate and discuss museum concepts and object interpretation with museum curators, and academic researchers.
Wired UK has a good article on the Museum with a mention of QRCodes, for a more in depth view of such matters head over to Digital Nerdosaurus.
We will have much more on QRator over coming weeks….
Love0 Tweet 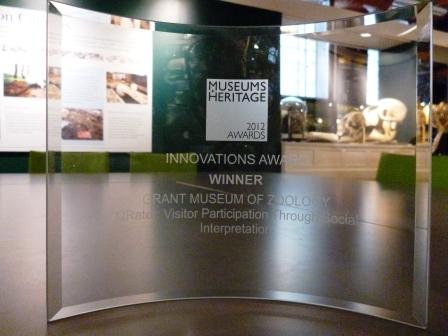