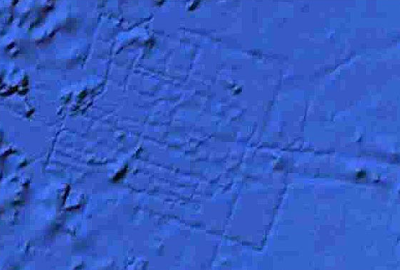 Google Earth 5.0 includes a view of the ocean bed and as such it allows global access to data that before its release was only available to specialist communities. As such it allows anyone in the world to look at put forward their own analysis which in turn opens up possible new discoveries – such as the possible finding of ‘Altantis‘ in an area area known as the Madeira Abyssal Plane.

Discovered by spotted by aeronautical engineer Bernie Bamford as he browsed through Google Ocean the layout certainly appears man made and does open up questions of a lost city on the seabed.

The feature is quite notiable in Google Earth – you can zoom in direct with our file Atlantis.kml (right click to ‘save as’ and then open in Google Earth).

As commented by M@ the Daily Mail are now running the view that ‘the photo, taken using Google’s latest gadget, Google Ocean, is nothing more than thin bands of sonar data collected by boats mapping the ocean floor’ – the see The Daily Mail for full info.

We still like to think its a lost city found by the power of the crowd…. 🙂