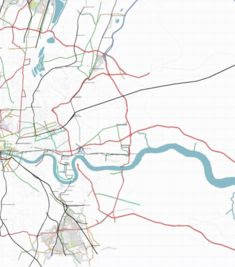 They said it would never work, the project was frowned upon by some in the industry yet its looking like the Open Street Map project is becoming one of the shining lights in the mapping world.

To be honest we should of covered this sooner as one of the guys behind it is Steve Coast (ex of our offices at CASA). The premise is simple – to map as many places and in as much detail as possible using the rise in portable GPS technology. If you get enough people involved, submitting data via their own GPS units, then you can quickly build up local and national coverage. The important point is that all the data is available under a Creative Commons Attribution-ShareAlike 2.0 license, which basically means you can use it freely as long as you acknowlegde the project.

This is where Open Street Map differs from any other mapping project, access to free geographical data is a hot topic at the moment as the article on our Virtual London in the Guardian demonstrates. Now if they could just increase the accuracy of the GPS units and then walk around the perimeter of buildings we would have free building outlines…

If you have a GPS then you can submit your own data to Open Street map.

OpenStreetMap: A Year of Edits Video