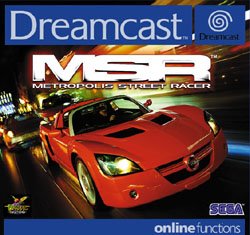 Continuing in our series of Cities in Games we cast our eye back to Metropolis Street Racer (MSR) on the Dreamcast Console by SEGA in 2001. MSR holds the accolade of being the first game to make us sit back in wonder, not at the gameplay but at the rendition of the cities of London, Tokyo and San Francisco.

The use of games in both architecture and planning is limited, yet back in 2001 Bizzare Creations, the creators behind MSR, had a better model of three of the worlds cities than most, if not all, of the architecture companies at that time. Games should not be seen as something more aligned to teenagers and kept tucked away in bedrooms, the latest, and indeed consoles from the past, should be given pride of place in the the office as a reminder of how advanced city visualisation currently is and how many companies are still struggling to reach 2001 console levels of rendering.

The development of MSR was, at the time, impressive – allowing players to drive around areas of London including St James Park, Trafalgar Square and Westminster taking in all the sights of Buckingham Palace, Admiralty Arch and Leicester Square to name but a few. In a city plagued by congestion to scream around city and end with a handbreak turn outside Buckingham Palace couldn’t fail to make you smile. Which is why perhaps games are so frowned upon in the
workplace… 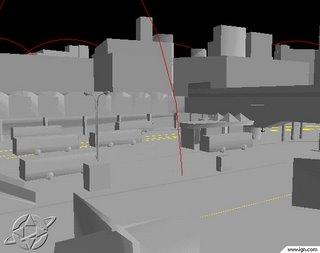 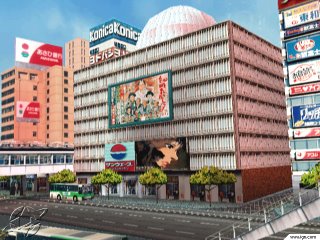 Technically however, MSR now seems very simple. Each city was constructed from block extrusions and texture mapped with a simplified texture taken from a photograph. The screenshot above of Tokyo was compared favorably in a interview on IGN as being almost indistinguishable from the real location. In reality of course the building is a textured box, but in 2001 this was state of the art. Coming forward to 2006 this is where we are today with SketchUp modelling and Google Earth. Version 4 beta of Google Earth allows texture rendering and by linking with SketchUp you can create rapid city models with phototexturing, in a similar manner to MSR.

The use of textures to provide the sense of location is clearly demonstrated in the video of MSR below:

MSR was a first – a series of cities created from textures that finally allowed the user to identify with locations, it was the first game to truly replicate the real world and give the user a sense of location and space. Sadly the Dreamcast was Segas’ swansong and marked their exit from the hardware market.

MSR was re-rendered and rejuvenated on the XBox under the title Project Gotham Racing 1 and 2 and more recently version 3 on the XBOX 360. These versions will be the subject of a future post on Cities in Games as they moved on from creating cities using simple phototextures to increasingly complex geometry.