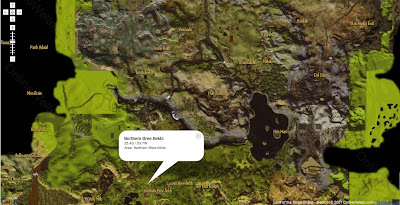 The trailer below provides an insight into the game:

MMORPG’s require large amounts of virtual land to both accommodate the number of players and to create a varied environment – as such they lend themselves to mapping. Games have long been mapped to provide a path through the various environments, often to be printed as part of ‘walkthrough’s’ in magazines (see our post on Ant Attack for the ZX Spectrum). With Web 2.0 it is becoming increasingly easy to provide maps of games as if they were real world locations.

As such Lord of the Rings Online has been mapped using the Google Maps API. The overview map is pictured at the top of the post, of interest are both the geographic features of the game and the level of functionality of the mapping interface. The inclusion of layers and levels of selection approaches a MMOPRG Geographic Information System – an interesting development in the mapping of games.

Take a look at the Lord of the Rings Mapping Tool.

More information on the game can be found on the developers site.

Mapping Games looks like becoming a regular series of posts in a similar vein to our Cities in Games Thread.