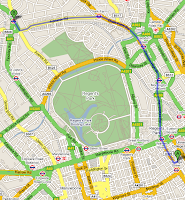 Google has just released a ‘beta’ walking directions feature to Google Maps. The system calculates the shortest walking distance as long as the map is aware of side routes, parks, pavements etc.

Walking routes are also time dependent with parks opening and closing at dusk and dawn, something that is not included yet. In London at least the system tends to avoid parks and default walking along the main roads – as the map to right illustrates, Regents Park has been ignored which is by far the quickest route.

However, its in beta and a welcome addition, especially when you combine it with GPS enabled devices such as the new iPhone.