Britain from Above: BBC 1 Sunday a New Geographic Information Rich view of the Nation 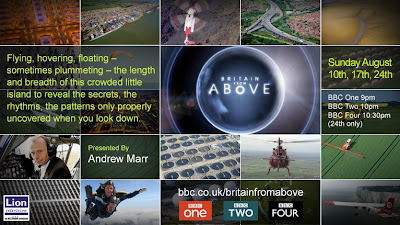 Britain from Above is ‘An epic journey revealing the secrets, patterns and hidden rhythms of our lives from a striking new perspective. Britain looks very different from the skies. From a bird’s eye view of the nation, its workings, cities, landscapes and peoples are revealed and re-discovered in new and extraordinary ways. The series uses cutting edge technology allows you to see through cloud cover, navigate the landscape and witness familiar sights as never seen before.

The trailer is embedded below:

The Centre for Advanced Spatial Analysis (home of digital urban) assisted in organising and refining vast hordes of information such as the 2001 Census, the intricate network of railways and even the GPS traces of 400 London taxis.

It was really interesting to see the data we collated used in the film, its a ‘not to be missed’ show, August 10 on BBC One at 9pm and BBC Two at 10pm.

BBC Britain from Above Consultancy Work 6 Comments
Next Post