Skip to main content
Close Search
aaggeography of the digital

Thoughts, Reports and Rambles from the AAG: Geography of the Digital

We are sitting in our first session of the conference; so far there are 18 people in a room that holds around 500. It’s a large conference with many simultaneous sessions so low numbers are par for the course, although it is a shame considering the high quality of work presented in this session.

First up is John Osth and Thomas Niedomysl, Exploring Human Interaction in Cyberspace, the Geography of YouTube.

Since the start in 2005, the website YouTube has grown immensely from being a garage-company to become one of the world’s most visited websites. An important reason behind the success is the built in ability for users to participate in the creation of the website by watching, ranking, commenting and by uploading material to be watched, ranked and commented by others.

Though the users’ WebPages may be designed differently, certain user information such as age and location but also links to interacting users is presented similarly, making collecting and analyzing possible. In this article, the geography of a sample of over 15 thousand different YouTube users and their interaction with other users is analyzed and visualized. The results show that despite the fact that the Internet annul the friction of distance, the interacting on the WebPages approximately follows the logics of real world geography.

15,101 channel owners were retrieved for the paper with over 70,000 connections. In terms of channel owners USA dominates followed by UK, Taiwan, Canada and HK, and Israel.

In conclusion – YouTube is predominately a rich world phenomena with interaction determined my language and cultural barriers.

Its always tricky to present research within a 15 minute timeframe, it was a well presented, interesting paper and one of those titles you wish you had thought of yourself….

Second on is C. Alex de Freitas with a talk entitled: At the intersection of Digital and Physical Public Space: Free Wi-fi and the Changing Geographies of the City and Its Public. A paper from the first year of his PhD studies. Interest in the public spaces of the city in terms of Information Communication. 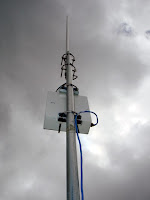 Wi-Fi presence can be difficult to discern in an urban setting. It can slip by largely unnoticed because of an apparent lack of infrastructure and the tendency for it to be used from indoors in a typically ‘private’ setting. Much of the existing research on Wi-Fi in public has focused specifically on the social interactions that it facilitates and its effects on the social interactions of co-present others. Other research has specifically addressed mapping signal strengths, Wi-Fi infrastructure and examining the business opportunities it may present.

Although some evidence from recent studies has suggested that Wi-Fi might reinforce or alter socio-spatial interactions, very few, if any studies have considered the possibilities of changes to spatial behaviour and what its existence in the urban environment means for people’s movements within and experiences of everyday city spaces.

Through an adaption of a photo-diary approach tracing the daily lives of twenty participants spread across four North American cities, this research questions how we may be beginning to know ourselves and our worlds differently by virtue of Wi-Fi. Conceptions of space and time have been radically altered by the new forms of accessibility and connectivity that are afforded by ICTs such as Wi-Fi. There is a need to (re)conceptualise public space as less restrained by physical boundaries and more complexly intertwined and converging with changing digital spaces. The result of this is a new urban public spatial realm that is neither physical nor digital, but an intricate and relational combination of the two.

Technologies is new to literature, especially in terms of geography. Wi-Fi does not conform to traditional spatial boundaries, exiting in Hertzian Space, although difficult to visually detect, Wi-Fi now blankets our urban areas. In the popular media Wifi is often labeled as ‘ubiquitous’, conceptions of space and time have been radically altered by the new forms of accessibility and connectivity that are afforded by ICTs.

In short, are we beginning to know our cities and ourselves differently by virtue of Wi-Fi? It does seem that Wi-Fi is contributing to changing geographical understandings of everyday urban experiences, adding new dimensions to urban life that are deserving of further attention.

As a side note, free Wi-Fi is a rare commodity in Las Vegas, we are currently paying $12 a day for Wi-Fi in our hotel room to write these posts, conference Wi-Fi use is limited to 30 minutes within a 24 hour period.

Third up is Place-Based Narratives and Participatory Digital Story Telling by Matt Kelly, University of Washington. The paper details an embryonic community outreach project (The Narrative Community – TNC) that will provide individuals with the capacity to produce spatial data and multi-media narratives about the places in which they live. Drawing on anecdotal evidence from StoryCorps and This American Life, I provide context for TNC by exploring the preponderance of place in contemporary digital settings. TNC will rely heavily on a participatory framework – from providing data production and story telling tools to individuals via sharing stations at public libraries, to aggregating spatial data and personal narratives via an interactive website – and the framework is possible by virtue of recent advancements in digital technologies. Participatory community data sharing and production sites, such as Neighborhood Knowledge California (NKCA), are used in this paper to illustrate the increasingly interactive nature of Internet technologies in general, and web-based geospatial technologies in particular.

Finally fourth is Robert Ramsay, University of Toronto with a paper entitled Wireless/Boundless, the Urban Imaginary of Wireless Industry Practitioners. We like the term ‘Boundless’ it’s a neat way to refer to ICT’s in terms of geography. Primary drivers for municipal Wi-Fi is digital inclusion, public safety, city services and economic development. Slightly tricky to make notes on this one, but another good talk, we really did expect more people to attend this session, its always difficult to present to a large almost empty room but all the speakers have been great.

Talking of which, we have two papers here at the AAG with our main session on Friday, the last day of the conference, at 8.30 am – not the best of times to be allocated…

aag geography of the digital No Comments
Next Post