admin May 18th, 2009
Oxford Circus in London is a busy intersection between Regent Street and Oxford Street with more than 200m visitors a year (BBC). Work is about to begin on a £5m project to pedestrianise part of Oxford Circus. Based on crossings in Tokyo, the new design will stop all traffic in all directions, and allow people to cross diagonally as well as straight ahead. Street clutter and barriers at the junction of Oxford Street and Regent Street will also be removed. 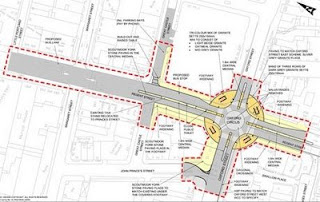 Graphic showing the Oxford Circus redesign
The movie below created by Designhive details how Atkins’ two-dimensional traffic and pedestrian models can be coupled with 3D Studio Max in such a way it is difficult to distinguish the model from a real piece of video footage. Combining the models in the simulation in this way makes the finished product particularly compelling. Furthermore it has the benefit of being based on the technical models developed to test the proposals prior to their implementation (such as the removal of street clutter).
The pedestrian model is a particle-based system controlling 5000 agents to match up the data produced by Atkins Intelligent Space. When the final simulation was rendered, the ‘particles’ were replaced with animated people, programmed to walk while the points were moving and idle when the points stopped for traffic lights.

Thanks to Duncan Smith and gisagents.blogspot.com – another blog from CASA worth noting, see their post on Interesting Articles.