We like the GeoInformation group here at digital urban, they have provided us with various datasets over the years – allowing work such as the LiDAR movie below possible (note the movie was captured in real-time)

LiDAR Scan of London – Textured from digitalurban on Vimeo.

As such their launch of UKMap is intriguing, UKMap forms part of a five-year programme to map over 500 towns and cities covering all urban areas with a population greater than 10,000 some 24,000 square kilometres throughout the UK. 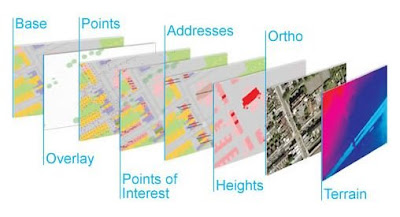 London is the first complete UKMap city covering over 1,700 sqkm and is available on 1 September 2009. Areas to be published in 2010 include the West Midlands conurbation, Merseyside, Manchester and parts of Yorkshire.

“The technology changes of the last few years have made the creation of UKMap not only technically feasible but commercially viable. There is a growing demand for choice when it comes to mapping. We believe the time is right for the UK mapping industry to provide GIS users with that choice.” says Seppe Cassettari, CEO of The GeoInformation Group.

These are interesting times, as Ed Parsons notes the Ordnance Survey monopoly finally faces a challenge and that can only be a good thing.

Also of note is the inclusion of height data, finally the possibility of flexible licensing on building outlines, heights and therefore 3D cities in the UK could be upon us.