Sitting in the Upham Hotel, Santa Barbara at a two day workshop on Agent-Based Modelling.

An interesting day of presentations ahead including a look into representations of complex modeling and a demonstration from David Maguire of ESRI.

Depending on the relevance we will update this post with details and thoughts..

First up is Mike Worboys, University of Maine looking into the technology which is driving effective agent based modelling.

Technology is weaving itself into everyday life until it becomes part of the general human experience, with each new innovation comes new challenges for modelling systems. Temporal progressions infer changes but we often miss occurrent entities and their relationships when developing models….

Distributed models are inherently complex, even if described by simple rules. Rule systems are not enough we need more ‘mathematical’ principles upon which such systems can be expressed. Credo: Process algebras and their extensions that handle mobility provide a possible next step from cellular rules.

Following on is Marina Alberti from the University of Washington on Modelling Complex Urban Landscape Dynamics: A Pattern-Orientaed Approach. Take a look at the research site for papers and details. 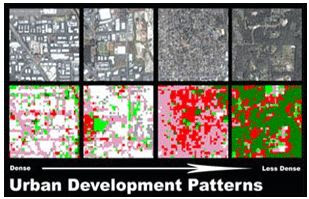 Agent based models are being used at Washington to model emerging phenomena resulting from the interactions of individual entities. Their agents exhibit complex behaviour and learning algorithms based on a hierarchical model.

Dynamic Probabilistic Relations Models (DPRM) are a particular type of nth order Markov model allowing for representation of different types of states and complex relations -each relation is described by its own set of variables. Washington’s Bio-complexity Conceptual Model is structured with demographic and a micro simulation of human behaviour, represented by UrbanSim. The interaction between land user and land cover is driven by a number of spatial interactions.

In general the model provides a probability of the transition of rural/semi-rural to urban areas based on past observations and the generated output.

The discussion is subsequently opened up to the floor moving onto both Activity Theory and emerging phenomena in terms of Complex Systems.

Union Square San Francisco – Panorama and Make Your Own Cube

Union Square San Francisco – Panorama and Make Your Own Cube