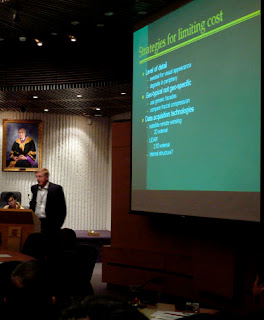 Mike Goodchild of the University of California, Santa Barbara is one of the key commentators on virtual geographic environments (VGE’s). Below is a note based summary of Mike’s presentation at the International Conference on Developments in Visualization and Virtual Environments in Geographic Information Science at The Chinese University of Hong Kong: Institute of Space and Earth Information Science – these are interesting times in the world of geography and visualization:

VGE’s are replica of real geographic environments and as such Mike rules out systems such as Second Life. VGE’s are complex and therefore slow and tedious to build. A database of approximately 3PB would be required to represented every human structure on earth with over 10% of UDP over the next 10 years. As such this is the problem, the cost is prohibitively high.

Strategies to limit cost on such a project – a true virtual earth – can be to:

Geo-typical facades can be used to rapidly construct virtual cities, this is of note when you are talking about every human made structure on earth.

The potential solution is:

A phenomena of the past few months in the geographic world – user generated content, also known as Collective Intelligence, Crowd Sourcing, Asserted Information and finally Neogeography. This amounts to the employment of millions of private citizens for no financial award – essentially Wikinomics.

Openstreetmap.org is a good example with all data contributed by volunteers, hand in hand are mashups in Google Earth, Maps and the 3D Warehouse in general – all user contributed geographic content.

This is made possible by the rise of Web 2.0 and Web Search Engines which are under estimated in their contribution. The ability to find geographic information is arguably as important as creating it.

With this information comes of course a change of accuracy, in general with the introduction of Google Earth and with it being the reference point for information input we can expect accuracy to be within 10 metres. This s a notable drop compared to GPS based data input or by more professional means. So relying on Google Earth is perhaps not the best way to proceed as an information base, it however one of the main tools of Neogeography.

National mapping agencies can be seen as being in decline which is perhaps why user generated content is on the rise. Combined with lowering costs of atmospheric sensors allowing small cheap devices to be built. Digital Dust is a unique term of small low cost digital sensors.

The Spatial Web is created by objects that know and report where they are – a network created by Digital Dust. In general there are three types of sensors networks, fixed, carried and human beings themselves. Bringing this back to Web 2.0 the combination of Digital Dust, and Human Beings – Citizen Science.

Citizen Science are networks of amateur observers who are possibly trained and skilled. This distinguishes general user generated content as content is sent in but partially aware personal.

In essence this brings VGI’s and ultimately a fully mapped, 3D digital earth down to user generated content – a Neogeographic World. Of note however is a reliance on technology and peoples motivation for collecting data. Self promotion is one part, every submitted piece of information can be user tagged and ownership maintained, a difference to traditional national mapping agency techniques.

VGI makes a very significant contribution on geography with a local focus. There are questions of trust, preservation and accuracy. Any person can put a name on a map, location or place, we are moving away from authority in the role of individuals in creating geographic information.

Is VGI a solution to the VGE construction problem? VGI is still predominately two-dimensional, but it holds huge potential.